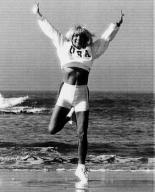 Judy Myers, CEO of uboomeru.com, a new social networking site for baby boomers and a fitness guru, alleges in her suit she was injured February 19, 2006, while working as an “Extra,” i.e. a paid audience member, on a studio soundstage at the Sunset Gower Studios in Hollywood, CA, during a production of the show, “Deal or No Deal.”

The stage manager emphasized that everyone had to move quickly to come down to participate as there was not much time for the commercial break. The lighting was dark. There were no hand railings for persons descending the steps to hold on to and no illumination strips on the edge of the steps, to see the edge of the steps.

As Ms. Myers was hurrying down the steps, pursuant to the specific instructions of the stage manager, who at the time was looking directly at Ms. Myers, Ms. Myers tripped and fell down, striking her right knee and leg on the steps and floor, suffering great and considerable personal injuries, damages, harm and experienced pain to her right knee, right leg and side of her body.

These failures on the part of the Defendants to maintain safe working areas for the plaintiff were the actual cause of Plaintiffs trip and fall injury and the Plaintiff suffered great and considerable injuries, harm, loss and damages, including but not limited to a torn meniscus in her right knee as well as other injuries to be specified during the course of this litigation.

Deal or No Deal will be holding auditions in Grand Prairie, Texas on April 14th.